A little-known Chinese company has bought up a vast stockpile of metals that are indispensable to the electronics industry, including enough indium to satisfy six years of global demand of the material found in flat-screen TVs and cellphones the world over.

Vital Materials Co. Limited’s $600 million swoop to acquire the stockpile in a government auction is the culmination of a wild tale of speculation and market manipulation in a small, but strategically important corner of the metals markets.

Almost everything bought by Vital Materials is on the list of minerals classified as “critical” by the U.S. two years ago as part of President Donald Trump’s vow to reduce America’s foreign dependence. While many of the metals are found in small quantities at mines around the world, China has come to dominate in transforming them into high-purity products needed in advanced manufacturing.

Outside of the metals markets, indium’s importance largely escaped attention until the early 2010s, when thousands of investors in China caught on to its significance and bought huge volumes on a trading platform, called the Fanya Metal Exchange. 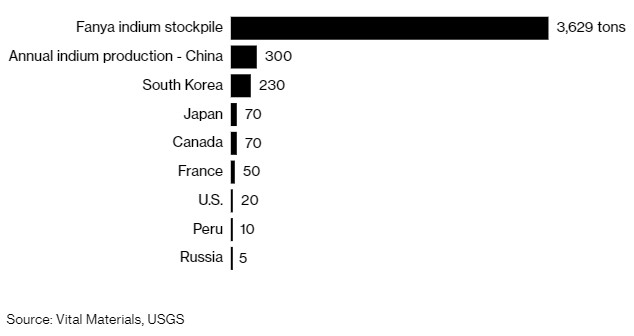 The back story of Fanya dates back to 2011, when the exchange was launched with a promise of fixed high-yield income. The investment was backed by inventories of strategic metals like indium, gallium and germanium, which help power high-tech products from night-vision goggles to computer chips.

But when the bourse collapsed amid suspicions of fraud in 2015, investors were left facing multibillion-dollar losses, according to media reports. Authorities impounded the colossal volumes of indium and other so-called minor metals that had accumulated on the bourse.

The result was a years-long pall over the small industry as traders questioned whether the stockpiles would eventually flood back into the market.

Now, with indium prices languishing at the lowest in more than a decade, China’s Vital Materials has paid more than $600 million to acquire the stockpile at auction. The deal removes the surplus of inventory from the market and helps draw a line under one of the biggest scandals to hit China’s metals industry.

“The fear that the Fanya stocks might flood into the market and destroy the already very delicate balance of supply and demand has been overhanging onto the market,” Vicky Zeng, Vital’s global vice president for sourcing, said in a statement. “With all these metals being moved to Vital, people can be relieved as all the metals will be consumed and leveraged internally.”

The move cements Vital’s position as a powerful force in niche markets as China and the U.S. focus on securing raw materials that are critical to their technological and military primacy.

While it’s little known outside China, the company employs more than 4,000 people across eight sites in the country and several overseas plants. It’s capable of using up the entire stockpile internally over time and is likely to complete further acquisitions soon that will further underpin its growth, Zeng said by phone.